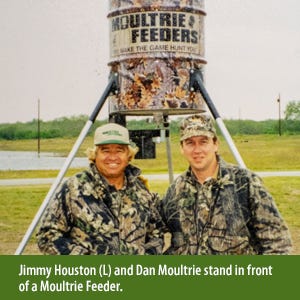 Today, managing property for better whitetail-deer hunting is as common as hunting over a food plot, but in the late 1970s and early ’80s, the whitetail craze was in its infancy. Dan Moultrie launched into the deer-hunting business out of a personal reason. Dan’s family had a piece of hunting land in southwest Georgia, but the neighboring landowner planted vast acres of corn and beans. There was little reason for deer to venture onto Dan’s property. So, he assembled his first automatic spin-cast deer feeder in an effort to keep deer on his property that normally just passed through. His first feeder worked so well that friends started asking him to make feeders for them as well. Fresh out of college, Dan started assembling feeders out of his apartment closet. 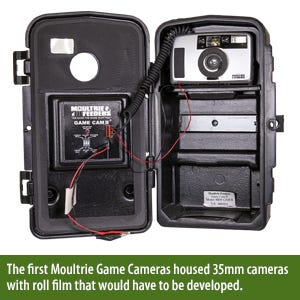 Dan built his company providing a solution to a problem, but innovation is what made Moultrie a leader among the wildlife-management crowd. So, Dan began working on the first trail camera. Dan’s first trail camera was a standard 35mm flash camera encased in a large plastic housing with holes cut out for the camera lens and flash bulb. “It was like Christmas morning every time you went to pull a roll of film and get it developed,” says Dan.

Game cameras started taking off and in the late 90s to early 2000s, digital photography was becoming more and more mainstream. Dan started experimenting with digital trail cameras and it wasn’t an easy problem to solve. “Digital cameras go to sleep and have to be woke up,” explains Dan. “That creates a huge battery suck. We used to have to put car batteries at the base of trees to get enough power to those first digital prototypes.”

In 2003 Dan sold Moultrie Feeders to PRADCO Outdoor Brands, a subsidiary of EBSCO Industries, which owns other iconic brands, such as Knight & Hale, Summit Treestands, Code Blue Scents, Texas Hunter Products and Whitetail Institute food plot seeds. Dan had offers from larger companies, but he worried about what might happen with his employee’s jobs in the future. However, PRADCO shared the same family values and customer focus as Dan. Moultrie Products is grateful for and remains committed to our valued customer — just as Dan Moultrie did when he started Moultrie Feeders out of an apartment closet. “Take care of people and do the right thing,” says Dan Moultrie. 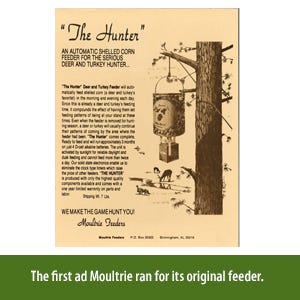 The right thing by our customers is to keep innovating, so while Moultrie game cameras went on to become the top-selling trail camera in the nation, Moultrie Products also built the first cellular trail camera, ushering in the era of Moultrie Mobile. With state-of-the-art technologies and partnerships with Verizon and AT&T, Moultrie Mobile sends trail camera pictures to your cellphone and computer. No more driving back and forth for hours to your hunting location just to pull SD cards. Now you can reliably set up your Moultrie Mobile cellular camera and stay out of that big buck’s core area, all while getting the photos you want and need to put together a killer game plan. You can even demo the free Moultrie-Mobile app to explore all of the user-friendly benefits of cellular trail cameras.