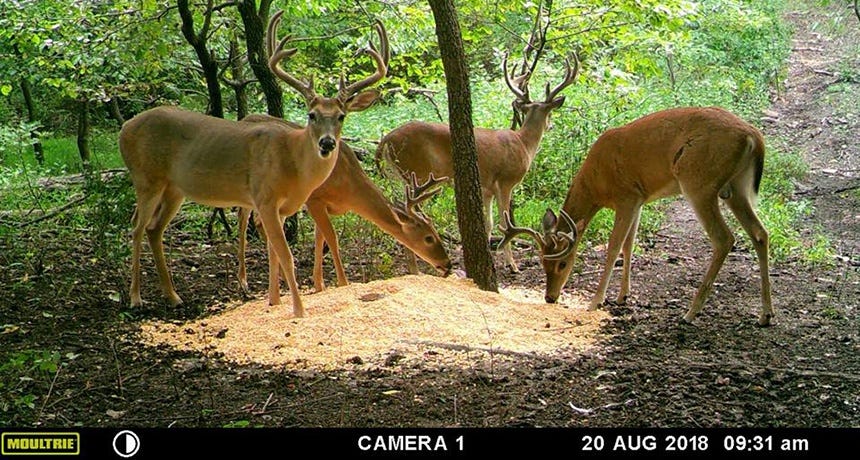 Observing bucks in summer won’t tell you much about their fall travel patterns or behavior, but it’s a good opportunity to get the drop on deer you could very well be hunting come opening day.

Seeing a group of velvet bucks feeding in a green field is one of summer’s finest pleasures. But what kind of intel can you glean by observing bachelor groups? The answer isn’t as cut and dry as you might hope.

Using the old “safety in numbers” rationale, researchers generally agree that bucks group up in summer for protection. Foliage is thick and tall this time of year, creating ideal ambush conditions for four-legged predators like coyotes. However, the groups break up once the velvet comes off and breeding instincts kick in.

So why even bother to locate bachelor groups in the first place? Well, for starters, it’s helpful for identifying fully mature bucks or for locating a specific animal that you’ve hunted in seasons past. If you see a giant in a bean field, you can rest assured that buck will be at least somewhere in the neighborhood once the season rolls around.

Research shows that once bucks shed their velvet, they disperse from their summer range, become more reclusive, and establish new core areas and home ranges. Sometimes those fall ranges will overlap with the summer range, and you’ll wind up hunting the same bucks you saw hammering the August beans.

If you do have a good group of bucks utilizing property that you can hunt, there’s certainly nothing wrong with doing all you can to keep them there. This is where the use of mineral stations, feeders, food plots and other enhancements can really make a difference. If those bucks have everything they need, they’re less likely to leave.

And even if they do, there’s a good chance they’ll return.

In my area of southern Michigan, where hunting pressure is intense, preseason recon provides me with valuable in-season information. Often, I’ll lose track of the velvet bucks I’ve watched all summer once they move into fall ranges. But at some point, when more and more hunters begin to hit the woods, and when food sources begin to change, those bucks often show back up on my land. Without my summer trail cam images and scouting sessions, I would hunt with far less confidence. And when you lack confidence, you lack execution.

One of my primary hunting areas in Michigan holds very few deer in the summer months. I’m not entirely sure why that is, but the other farms in the area are packed with deer—and some nice bucks—throughout the summer. Observing bachelor groups from the side of the road on land I can’t hunt might seem pointless, but I know those bucks will eventually disperse, and when one or more of them starts showing up on my turf, I’ll be ready for them. —Tony Hansen

About the Author: Tony Hansen manages for and hunts mature whitetails in his home state of Michigan, where sweating the details is the only way to succeed. When not hunting his own properties, he can be found pursuing deer on public land throughout the whitetail's range. Tony's writings have appeared in Outdoor Life, Traditional Bowhunter, North American Whitetail, and Bowhunter.